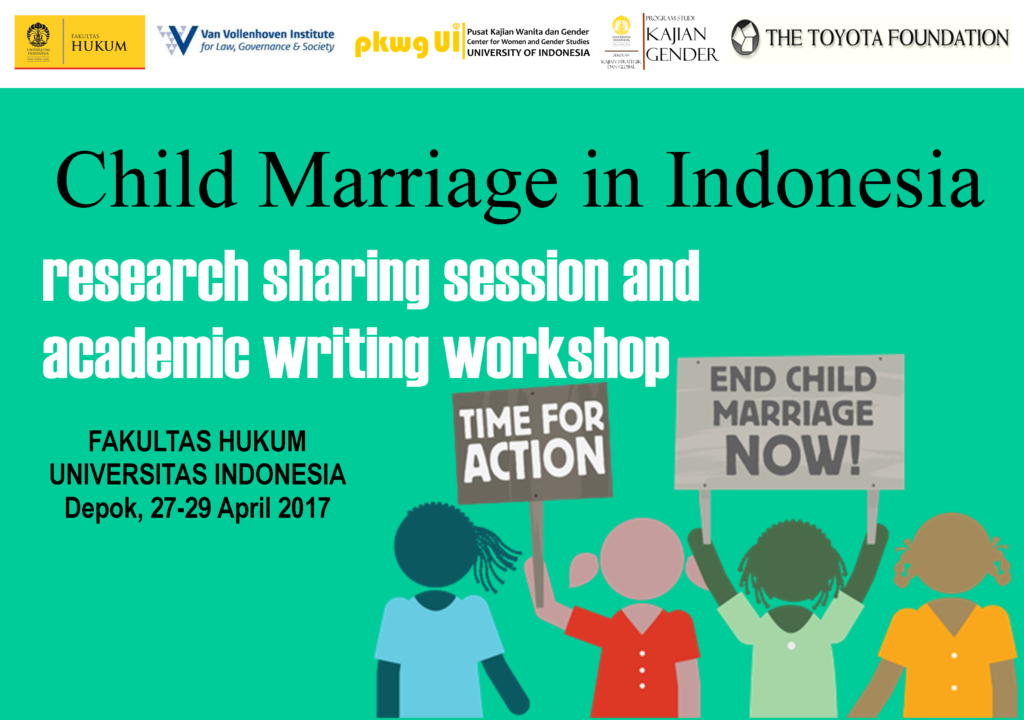 From April 27 to 29 April, the Van Vollenhoven Institute for Law, Governance & Society in collaboration with the Law Faculty, the Gender Studies Graduate Program and the Center for Women and Gender Studies at Universitas Indonesia will organize a Research Sharing and Academic Writing Workshop on ‘Child Marriage in Indonesia’ at the Law Faculty of Universitas Indonesia in Depok, Jakarta.

Child marriage, or marriage with one or both of the spouses under 18 years of age, is a hotly debated issue in Indonesia. The practice that seemed to be fading out has attracted renewed attention of policy makers, civil society and religious leaders, because it was recently found that the decline of child marriage has halted and is actually slowly rising in some regions. In 2015 22.8 % of ever-married women aged 20-24 in Indonesia was a bride before the age of 18. Indonesia now ranks seventh in the global top ten with the highest absolute number of child marriages, which means that there are some 3,700 Indonesian girls getting married per day, including 800 child brides under the age of 16. There is a recent surge of academic research on what is actually happening, why and how child marriage is practiced and who is involved. NGOs, both local and international organisations, are actively developing programs to prevent or mitigate the negative consequences of young marriages and teenage pregnancies. At national level there is a clash between discourses for and against child marriage, based on religious morality, customary norms, child rights and development arguments.

As a follow-up of the explorative AMT workshop on Child Marriage, Sexual Moralities and The Politics of Decentralization in Indonesia in 2015, this workshop aims to present the state-of-the-art research about child marriage in Indonesia and to work on publications on the topic. The first day consists of panels with research presentations, which is open to the general audience. The second and third day will be closed sessions with selected authors, who will improve their papers with guidance on academic writing.

The Toyota Foundation is funding this workshop, with support from the Law Faculty of Universitas Indonesia and Van Vollenhoven Institute for Law, Governance & Society.